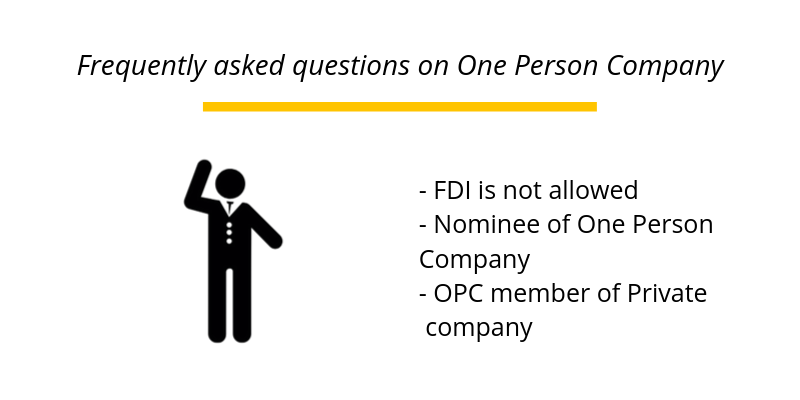 1. Can an Indian citizen who is living abroad allowed forming One Person Company?

No. As per the Act, Only Indian born citizens can form a One Person Company. Non-resident Indians or individuals who do not reside in India for over 182 days cannot incorporate a OPC.

2. Is Foreign Direct Investment allowed for One Person Company?

3. Can a foreigner/ NRI become Nominee of One Person Company?

No, the Act clearly states that, the nominee should also be an Indian resident citizen.

As per the Act, Nominee of one OPC, cannot be a nominee of another OPC. In this event, the Nominee has to withdraw his membership from either of the OPCs within one hundred and eighty days.

5. What if, if the turnover of the company exceeds Rs.2 Crores?

As per the Act, the average annual turnover during the relevant period should not exceed Rs.2 Crores. If it exceeds, then the company automatically get converted to a Private Limited Company.

6. Can OPC become a member of another private Limited company?

The Act has not made any restriction for a One Person Company to become a member of another Private Limited Company.

7. Whether a Non Banking Financial Investment Company can be formed as a One Person Company.?

As per the provisions of the Act, The OPC cannot carry business of Non Banking Financial Investment activity including investment in security of any corporate.

8. If director/s is not mentioned in Certificate of Incorporation, who will become director of the company.

If it is not specifically mentioned in the incorporation document, it would be assumed that the sole shareholder shall be the sole director.

9. Is it mandatory by law to get the signature of a Company Secretary on the annual return of an OPC?

It is not mandatory to appoint a Company Secretary in OPC and hence the annual return of OPC companies can be signed by the Director.

10. What are the conditions in converting an existing Private Limited Company to an OPC?

11. Whether an OPC can be converted to a Public Limited Company and vice versa?

12. What is the Process of Conversion of a Private Limited Company to an OPC?