Difference between a patent license agreement and a patent assignment agreement

A patent is an exclusive right granted to the owner of the inventor to manufacture, use, exploit the patented product or process for a limited period by the government. When a patent holder cannot exploit his rights, he seeks to license or assign the patent to a third party. In India, the provisions regarding licensing or assigning of a patent are governed by the Indian Patent Act, 1970. 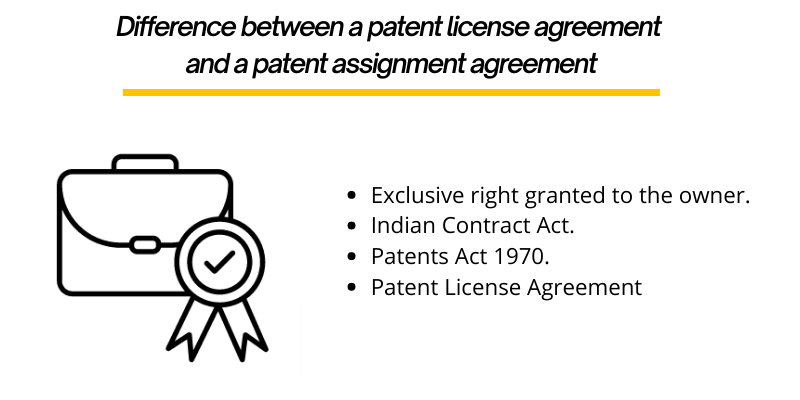 The Indian Contract Act defines an agreement as every promise or set of promises between two parties. In other words, an agreement is a document containing the parties' understanding in respect of a particular subject matter. The Patents Act 1970 states that a patent owner may license or assign his rights to a third party. However, an assignment or license must be reduced in writing and registered for such rights to be valid. Therefore, it can be said that unless the parties enter into a patent license agreement or a patent assignment agreement, such license or assignment shall not be valid.

What is a Patent License Agreement?

What is a Patent Assignment Agreement?

Differences between a Patent License Agreement and a Patent Assignment Agreement

The differences between a Patent License Agreement and a Patent Assignment Agreement are as follows:
Difference

Rights available under the Act

Under the Patents Act, the patentee has the right to commercialize the patent through an assignment or license. However, should make such a decision carefully weighing the advantages obtained via such arrangement.