Trademark opposition is essentially a legal challenge presenting rigorous objection to the registration of any filed trademark application on solid and justifiable grounds. It does not necessarily need to be filed by the registered proprietor of the mark; it could be a customer, purchaser or someone in the public likely to use the goods and not only representing himself, but also the public at large. 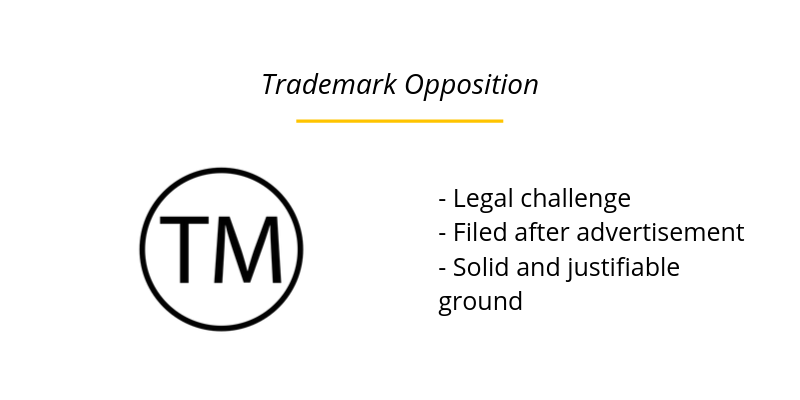 The opposition must be filed before the Registrar (and not directly before the IPAB) within a period of 4 months from the advertisement of the trade mark in the Trade Marks Journal.

Opposition may be filed by anyone (as provided under section 21 of The Trade Marks Act, 1999) to be filed in the prescribed format (Form TM-0) paying the requisite fee of INR 2500 and in the appropriate office (where the trademark application sought to be opposed has been filed).

Particulars of the Notice of Opposition

Among other things, the notice of opposition should contain particulars such as – the impugned application number; the name of the applicant of the trademark sought to be opposed; indication/description of the goods and/or services from the impugned trademark application; application or registration number and the filing date (if available), statement and indication of prior use of an earlier mark as well as an indication of the country or countries where the mark has achieved a well-known status (if applicable); representation of the applicant’s mark and where applicable, representation of the earlier mark along with class/classes of goods or services protected and covered under earlier mark.

Over and above any or more of these grounds, the opponent needs to demonstrate a direct and personal stake in the event the registration of the impugned trademark is allowed.

What happens after opposition is filed

The applicant needs to file a counter-statement in Form TM-6 at the appropriate office and paying the prescribed fee, within two months from the date of receipt of the copy of the notice of opposition. Unless the same is done within the stipulated period, the application will be deemed to have been abandoned.

After all the documents and particulars are verified at the Trademark office, evidence needs to be filed in support of the opposition within two months of the receipt of copy of the counterstatement filed by the applicant.

Copies of the same need to be delivered by the opponent to the applicant and an intimation to the Registrar made in writing. In the event that the opponent fails to do within the time prescribed, his opposition shall be deemed to have been abandoned and an order to that effect issued to the parties.

Similarly, the applicant too needs to furnish evidence (either relying on the facts already stated or evidence not tendered earlier, by intimating the same to the Registrar) within 2 months of the receipt of the copies of affidavits in support of opposition.

The copies of such evidence filed need to be delivered to the opponent.

Further evidence may be filed by either party through an Interlocutory Petition along with the requisite fee of INR 2500.

In the event the opponent fails to establish/adduce substantial evidence in support of his claims, the petition shall be dismissed, as seen in the Delhi High Court case of Champagne Moët and Chandon v Union of India (WP (C) 9778 of 2006, May 19 2011), where lack of evidence in respect of prior use of the mark and goodwill accumulated led to dismissal of the opposition petition.

A hearing is then scheduled and based on the documents and evidence on record, to which the parties are required to respond stating their intention to appear for the same by submission of Form TM-7. They are then heard by the Hearing Officer, and the case discussed on merits.

Don’t know how to reply to Trademark Opposition. Visit Quick Company, our experts will answer all your queries.