A promoter of the company is a person who has been specified under such role in the prospectus or an annual return of the company. People with the responsibility of the promoter have to solicit people to invest in the company when it is under the process of formation. 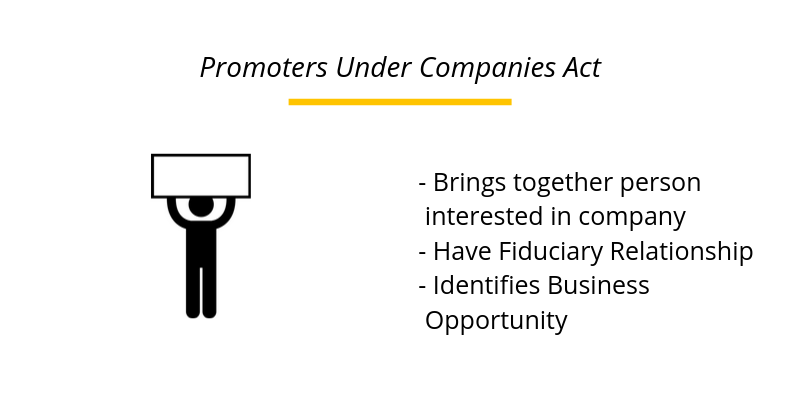 Who is the Promoter of a company?

A promoter for a company can be an individual who performs all the initial duties that are essential to bring the companies into existence. They are the people that conceive the idea and introduce it to the people to induce them to join the company in a specified role.

As per companies Act, 2013 following people are treated as promoters:

NOTE: A person serving on a mere  professional capacity are not considered promoters of the company

A promoter of a company is neither a trustee or an agent of a company they have a simple fiduciary duty to follow. The trustee has to disclose all the facts about any secret profit that is made by him while forming the company.

NOTE: The promoter of the company is liable for misstatements if any for original allottees of shares only and the subsequent allottees are not included in it.

The promoter of the company will be liable for imprisonment for a term that may extend for 2 years and a fine which may go upto Rs.50,000 for any untrue statements made in the prospectus.

Status of Promoter to Pre-incorporation

The status of such a contract is different from others that entered after the company incorporation. The contract will be introduced between the interested party and the promoter but later on, when the company comes into existence the liability of promoter will cease to exist.