The choice of a business name for a company or business is one of the initial steps in starting the business preceding the registration of a logo or trademark. While in the process of choosing a name of a business or company, the entrepreneurs must be well aware of the names and emblems (Prevention of Improper Use) Act, 1950, under which there are certain words and marks which do require prior approval of the Government for the usage.Here is a brief on the prohibited business names and logos in India. 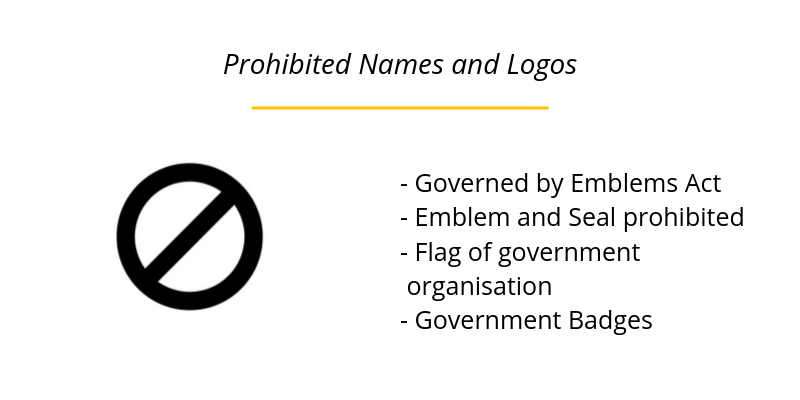 Emblems and Names (Prevention of Improper Use) Act, 1950

No one can use the marks or names which are listed below without the prior approval of the Central government or State government in any trade, business or in the title or any patent, trademark or design.

Name, Emblem, Seal of Flag of the Government

The name, emblem or the official seal of the President, Governor or Republic or Union of India cannot be used for a company’s name. The name or pictorial representation of Rashtrapati, Raj Bhavan or Rashtrapati Bhawan cannot be used.

Names such as “Ashoka Chakra” or “Dharma Chakra” or any pictorial representation of Ashok Chakra as used in the Indian National Flag or in the official seal or emblem of the Government of India or any of the state government.

The name, emblem or the official seal of the following organisations can’t be utilised in connection with a business name or mark.

The name or pictorial representation of Mahatma Gandhi, Chhatrapati Shivaji Maharaj, Pandit Jawaharlal Nehru or the Prime Minister of India or the words “Gandhi”, “Nehru” or “Shivaji” except the pictorial use on the calendars where the names of the manufacturers and printers of the calendars are given and these calendars are not being used for advertising goods.

Medals, badges or decorations which are being instituted and given out by the Government from time to time or the miniatures or replicas of such medals, decorations and badged or the names of the badges, medals or decorations cannot be used.