Is the same trademark by different entities allowed?

A trademark must have distinctive qualities, making the mark unique from existing ones. In order to get registration, a mark must qualify for various conditions provided by the Trademarks Act. One of the grounds for refusal of trademark registration is when the mark is similar to the already existing trademark and when there are similarities in goods/services covered by the trademark. 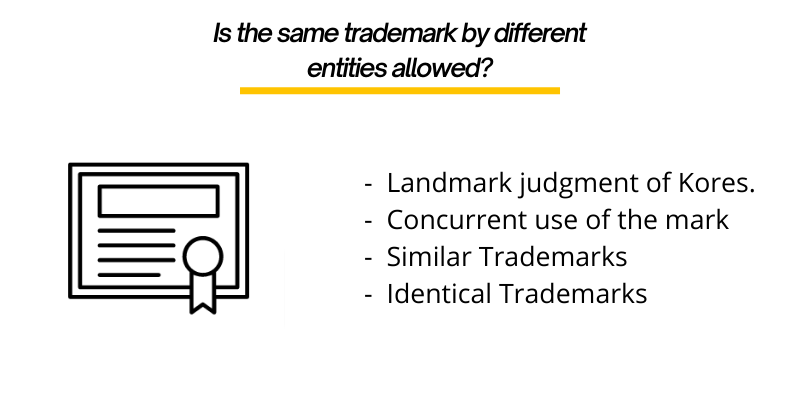 Conditions are imposed for registration of the mark to prevent the later mark from taking undue advantage of goodwill earned by the already existing trademark. But there are certain situations where two entities in good faith use a similar mark. This article discusses the provision where two separate entities can register a similar trademark.

What is the provision of the trademarks act deals with the registration of similar mark by separate entities?

Section 12 of the Act provides that:

What constitutes a similar trademark and an identical trademark?

When can a trademark be said to have honest concurrent use?

Through the landmark judgment of Kores(India) Ltd. v. M/s Khoday Eshwarsa and Son, the factors for determining the honest concurrent use have been laid out which suggest that:

The defense for honest concurrent use cannot be used where well-known trademarks are involved. Also, the parties involved must produce strong evidence to prove the genuine concurrent use of the mark.