To close an LLP make an application to the registrar to declare LLP as defunct or wind up compulsorily with the order of the tribunal. 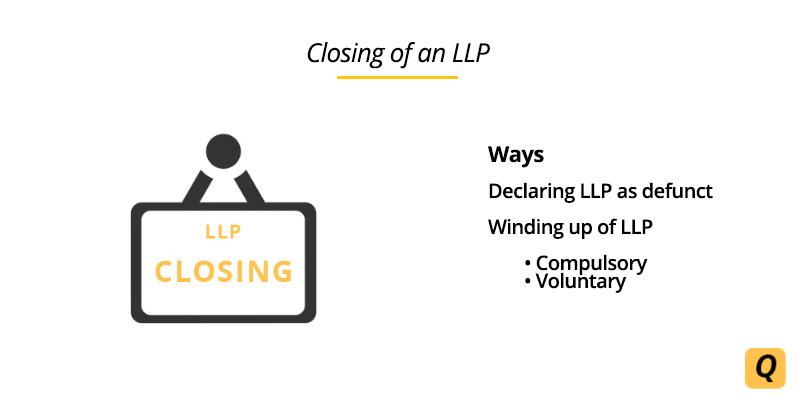 The LLP Act, 2008 provides the necessary guidelines for closing an LLP. The act provides the following ways to close the LLP:

Declaring the LLP as Defunct

The generic meaning of the word 'defunct' is a state of being non-existing and dysfunctioning. A Limited Liability Partnership is said to be defunct when it is no longer in business for more than one year. According to Section 75 of the Limited Liability Partnership Act, 2008 it states that the Registrar has rational cause to declare an LLP (not carrying on business or its operation) as defunct. Based on the provision of the Act, the name of the LLP may be struck off the register.

Winding up of LLP

There can be two ways to wind up an LLP, either initiated voluntarily by the members or compulsorily by a Tribunal. A Limited Liability Partnership is required to pass a resolution in order to close the LLP which would need an approval of three-fourth of the total number of its partners. In case an LLP has lenders then the permission of the lenders are also required for closing the LLP.