FDI in an LLP

A Limited Liability Partnership is a form of business that attracts foreign direct investment through foreign nationals. Though the entry of FDI is restricted in specific ways, people still encourage it to invest as it is considered one of the safest ways for investment. Moreover, it also aids in the economic growth of the country. 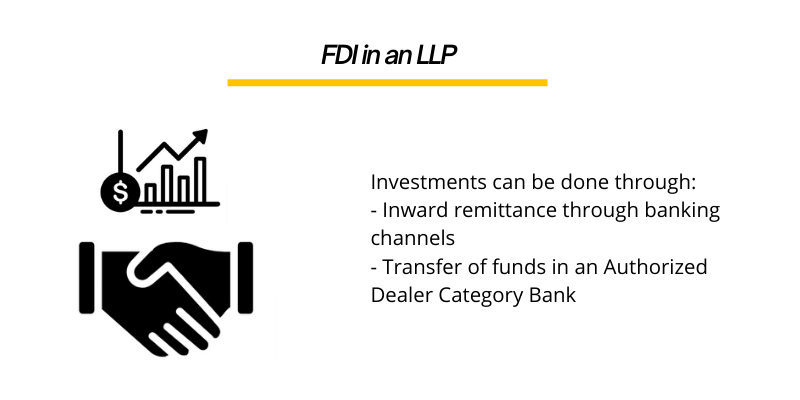 Foreign Direct Investment in an LLP

Limited Liability Partnerships are among the best forms of partnership, and it is considered an appropriate form to make huge investments. Here, the investment made can be withdrawn by the Designated Partners/Investors which they have invested as Capital Contribution or by way of withdrawal of Profits.

Furthermore, in companies, investments can also be withdrawn through buyback of shares and or by way of reduction capital which again becomes a time-consuming process, and therefore the trend to invest in Limited Liability partnerships is increasing every day.

It is also suitable for foreign investors to invest by way of FDI and to repatriate its money at any time without following a considerable burden of compliances.

In any case, since their initiation, LLPs in India have been filled with acquiring earlier government interference to get FDI and confronting cover limitations on downstream investments. However, on November 24, 2015, due to the Indian Government's "ease of doing business in India'' campaign, the Department of Industrial Policy and Promotion ("DIPP") gave Press Note 12 of 2015 to loosen up FDI ventures.

Furthermore, the Limited Liability Partnership has also consented to foreign nationals and foreign LLPs to become a part of Indian LLP, as per the Foreign Exchange Management Act and regulations and rules. To encourage and support this, a legal framework and regulatory policy have been introduced to allow foreign direct investment by the Reserve Bank of India through the vide Notification No. FEMA.385/2017-RB dated 03.03.2017.

Who can all invest in a Limited Liability Partnership?

"An individual inhabitant outside India (other than a resident of Pakistan or Bangladesh) or an entity incorporated outside India (other than an entity in Pakistan or Bangladesh), not being a Foreign Portfolio Investor or Foreign Institutional Investor or Foreign Venture Capital Investor enrolled as per SEBI rules, may contribute unfamiliar capital either via capital commitment or by acquisition/transfer of profit shares in the capital design of an LLP under Foreign Direct Investment, dependent upon the agreements as determined in Schedule 9".

As mentioned in the above paragraph, it can be concluded that an individual resident outside India (other than a resident of Pakistan or Bangladesh) or an entity incorporated outside India (other than an entity in Pakistan or Bangladesh) may contribute unfamiliar capital either via capital commitment or by acquisition/transfer of profit shares in the capital construction of an LLP.

What are the sectors where Foreign Direct Investment is possible?

Foreign Direct Investment is allowed under the automatic route in LLPs working in areas/exercises where 100% FDI is permitted through the automatic route. To learn about such areas, a reference can be made to Annex B for Schedule 1 of these Regulations.

However, there is a list of sectors where Foreign Direct Investment is not permissible. The sectors are:

Sectors not eligible for any amount of Foreign Direct Investment are:

How can the investments be made in Limited Liability Partnerships?

Any contribution made to capital from a limited liability partnership would be an eligible investment under the scheme. Any payment made by an investor towards capital contributions shall include:

Note: AD banks are also known as Authorized Dealer banks which aim to ease the foreign exchange facilities for NRIs.

What are some of the restrictions faced by foreign nationals for investment?

From the article drafted above, we can conclude that through investments in an LLP is a difficult way and includes a lot of restrictions, it is still considered as one of the most important ways of investment in the sectors to support the economic conditions of the country. Therefore, foreign direct investment is encouraged by the government as well as the Ministry of Corporate Affairs.