Difference Between the Product and Process Patent Regimes

Among all the Intellectual Property assets, patent protection is most sought by inventors and industrialists since it gives them a ‘Monopoly Right’ for a specific period of time for their innovate product or process. To gain a patent protection, there is two Patent Regimes that are followed in India, namely Product Patents and Process Patents. 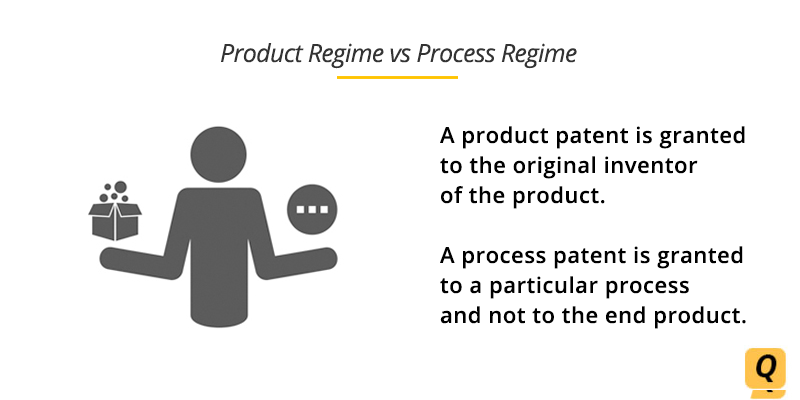 Traditional factors of production like land and capital (Fixed Assets) are no longer the only value-creating factors of production. In this tech-driven business environment, knowledge and ideas (Intellectual Property) also create value in the economy. India is part of a global community where there are several technological innovations created on a daily basis. This creates the base for both process and product patent.

To protect a certain product or a process, the Government grants a right of protection to the inventor (for a limited period of time) called a Patent. The Government of India implemented both patent regimes as a part of the 2005 Patent Amendment.

As per the Patents Act, 1970, a Patent is a statutory right granted to the inventor by the Government for a fixed number of years. The patent protection gives a right to the inventor to stop others from manufacturing, selling or using his/her patented product or process.

What are Product and Process Patents?

Under this regime, the patent is granted to the original inventor of the product. Here are a few characteristic features of a Product Patent:

As the name says, a process patent is granted only to a particular process and not to the end product that is a result of such a process.

Dissenting View Around the Globe

Developed countries have recognised the importance of the Product Patent regime as it is a comprehensive protection for an invention. However, in developing countries, products patents have not yet been recognised. This hinders product protection at a global scale, as product and process patents are required to provide a different level of protection.

India has also been able to adapt to this through the 2005 Amendment after India agreed to be bound by the TRIPS agreement.

The 2005 Amendment led to changes in two major sections, namely, Section 2 and 3 of the Patent Act. The definition of Patents under the Act under Section 2(j) was changed to state that:

an invention means a new product or process involving an inventive step and capable of industrial applications.

World Trade Organisation codified an agreement in the Uruguay Round of talks, which was intended to recognise and create an equitable system of International trade practices. Among other value additions, it was explained that products exported consisted of intangible assets that were to be protected by strong Intellectual Property Laws.

The TRIPS Agreement required all the countries (that ratified the agreement) to follow the Product Patent Regime.

When product patents were introduced in 2005, there were several issues that surfaced:

Developing countries focused only on Process Patents to increase innovation in the economy, and to promote healthy completion and effective product pricing models. In fact, Brazil is yet to recognise Product patents. The sole dependence on process patents creates a dilution in the protection of an inventor’s right. It leads to the invention of the same product, but through different processes.