Applicability of SARFAESI Act for NBFC 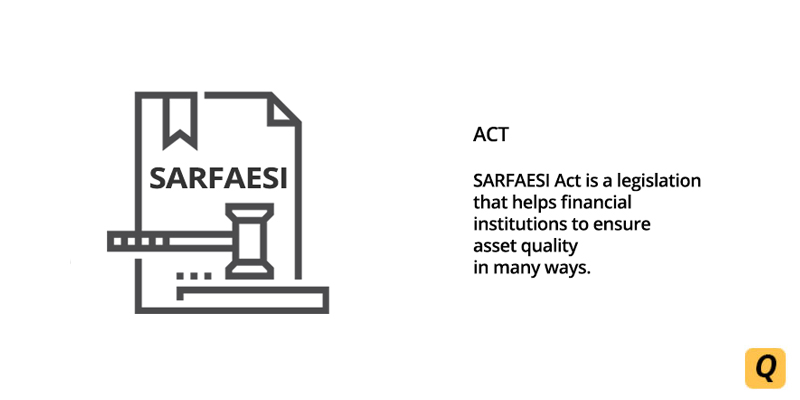 SARFAESI act refers to The Securitisation and Reconstruction of Financial Assets and Enforcement of Security Interest Act, 2016. The Ministry of Finance has notified 196 NBFC companies which have been brought under the definition Financial Institution under the SARFAESI Act.

This announcement comes after the budget announcement in the year 2015-16; it has allowed the applicability of SARFAESI to certain NBFC’s

SARFAESI Act is a legislation that helps financial institutions to ensure asset quality in many ways. It mainly helps in addressing the problem of Non-performing assets. SARFAESI act gives power to banks and financial institutions to take over the immovable property that is hypothecated or charged to enforce the recovery of debt. SARFAESI act declares Loan as a non-paying asset (NPA) only when the installment on principle is due for more than 90 days or more. SARFAESI act is applicable on loans greater than ten lakhs only.

Power of NBFC’s and Banks under SARFAESI act

With the significant changes that favour SARFESI act by 2016 amendment bill, the NBFC companies are also brought up to the power of banks. These changes have been implemented to 196 companies in total, which are systematically important Non-Banking Financial Company.

Related: Difference Between an NBFC and Bank

NBFC’s which are covered by the SARFAESI Act are:

The threshold set for other financial institution under the SARFAESI Act is Rs. 1 lakh only.

Can secured creditors avail benefits of SARFAESI Act even if proceedings are going on in the tribunal?

Can arbitration proceedings and enforcement of security interests under the SARFAESI Act happen at the same time?

The amendment has not placed any bar on arbitration proceeding to go on simultaneously with actions which are conducted under SARFESI act. As both, the process aims at resolving the issue of Non-paying Assets

Bringing NBFC’s under the purview of SARFAESI act has brought in the much-needed reform for them. This amendment was done to bring parity in the regulation of NBFC with the other financial institution.

This amendment has solved the problem of NBFC’s by improving the recovering capability of the NBFC’s. NBFCs can now enjoy the benefits that were applicable only to banks.